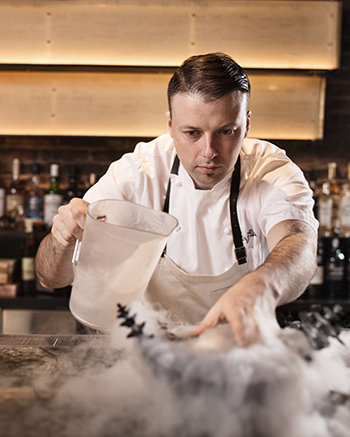 Born and raised in South London, England, Chef Macdonald began his career through an apprenticeship at a grand Victorian manor house in the countryside of Surrey, where he learned all aspects of fine hospitality and gravitated toward the kitchen’s pastry department.

He then moved to Madrid, working at a two-star Michelin restaurant owned by the former king of Spain. Two years later, he left Spain for a top restaurant in London, with a solid foundation in traditional Spanish cuisine as well as modern molecular gastronomy. Still, Spain tugged at his heart, so Chef Macdonald moved back to a three-star Michelin restaurant in San Sebastian. He then made his way to work at Chef Gordon Ramsay’s newest dining project at the New London Hotel, which soon earned two Michelin stars.

In early 2017, Chef Macdonald opened his first solo project ‘Chanson’ in New York’s Flatiron district – a high-end patisserie by day, and subterranean dessert bar by night. In 2017 he was ranked as one of the Top Ten Pastry Chefs in America by Dessert Professional Magazine, and Patisserie Chanson + Dessert Bar has received worldwide acclaim from outlets such as So Good Magazine, NYT, Eater best bakeries in NYC, Thrillist (received over 10 million views) Grubstreet and Vogue to name a few.

Chef Macdonald’s first cookbook was released in Spring 2019 – Bake showcase’s some of his favorite recipes throughout his career.

Valrhona: Tell us a bit about your background as a pastry chef and what you are doing now.
Rory Macdonald: I started my career as a chef as an apprentice in a 4 star hotel – the last year of that apprenticeship was in the pastry department, from there I was hooked, and although I have done savory throughout my career also, I have always ended up back in pastry. For me food is food, and whether it's sweet or savory it’s all about balance. After my apprenticeship, I moved to Spain, to Madrid and then San Sebastian, before returning to London and then ultimately New York, where I now have my own shop, Patisserie Chanson & Dessert Bar, located in the Flatiron district in Manhattan. I also just released my first cookbook ‘Bake’ which was published by Rizzoli.

Valrhona: What inspired you to enter the world of pastry?
Rory Macdonald: I always loved the discipline of pastry – if you follow the rules, you can get the same result. For me, there is something very rewarding with that. On top of this, the endless possibilities with pastry, means that there is always something new to learn, something new to create, and for me when you can incorporate this with more savory flavors and ingredients, these possibilities increase tenfold.

Valrhona: From where do your inspirations for new creations come?
Rory Macdonald: Sometimes it can be color, maybe I’ll see two colors together and think they work well together, and how can I create something from that. The most common inspiration is obviously the seasons, trying to make new and creative items with the product that you have around you, and not serving strawberries in December (at least in NYC ) is very important to me. My team is also a big inspiration for me; we try to create and improve as a team so everyone is involved.

Valrhona: Who in your life has been the biggest mentor/inspiration in your career?
Rory Macdonald: I have been fortunate to work with some amazing chefs in my career, and they had a massive impact on me. When I worked in London I worked at a place called Pearl in Holborn and my chef was Jun Tanaka. This was easily the hardest kitchen I had ever worked in. They were grueling days, but as a team we all started together and we all finished together regardless of department. Jun was the fastest, cleanest most efficient chef there. No one could keep up with him, and that’s the biggest lesson I took from there - if you want to call yourself ‘Head Chef’ you should be the best, the quickest, the cleanest. How can I shout at someone for not making Macarons right, if I can’t make them any better? The team I worked with at Pearl was one of a kind, it would be very difficult nowadays to find that sort of commitment and teamwork, but it’s something I strive for every day.

Valrhona: What is your earliest dessert memory?
Rory Macdonald: My granny’s apple pie.

Valrhona: What is your favorite type of pastry to make? To eat?
Rory Macdonald: Too hard to answer, but, I could eat chocolate all day (yes, Valrhona). My favorite dessert is probably a traditional apple Tarte Tatin, and my favorite thing to make... I like to make everything!

Valrhona: If you could pass one bit of insight down to another chef, what would it be?
Rory Macdonald: Decide on a goal, find a path, and stick to it. Don’t be distracted by outside noises or money, just focus on what you want to ultimately achieve. A racehorse wears blinkers so they can only see the finish line – be a racehorse! Everything takes time, don’t make decisions based on the next couple of months, base it on the next few years, where do you want to be and how are you going to get there. It’s not easy, but if it was easy, everyone would do it.

Valrhona: What is your favorite kitchen tip?
Rory Macdonald: Even if it’s clean, clean it again.

Valrhona: What is your favorite Valrhona Chocolate?
Rory Macdonald: MANJARI. This is probably my go-to chocolate, for me, it's very versatile but strong enough to stand up to other flavors but still being able to taste the qualities of the chocolate.

Valrhona: When pairing with chocolate, what is your favorite flavor combination?
Rory Macdonald: Citrus and chocolate

Valrhona: What is your favorite perk of the Cercle V program?
Rory Macdonald: Having access to the newest product and being part of a larger community of chefs.

Valrhona: When & how did your “relationship” with Valrhona start?
Rory Macdonald: I first started using Valrhona in London, I remember having different flavors and types of chocolates whereas everyone else just had dark, milk and white and was all overly sweet.

Wine or Cheese?
Wine, then cheese, then more wine

Coffee or Tea?
Coffee, before I get the wine

COFFEE CRÉMEUX
In a small saucepan heat the milk, cream and coffee beans until just simmering, remove from the heat, cover with plastic wrap and steep for 30 minutes. Strain into a bowl and rescale – add additional cream to take the total weight back up to 300g. In an iced water bath soak the gelatin leaves.

In a clean small saucepan add the coffee cream mixture and bring to a simmer. In a separate bowl, whisk to together the egg yolks and sugar, gradually add the hot coffee mixture, using a spatula, make a figure of motion stirring constantly until slightly thickened. Using your hands squeeze out the excess water from the gelatin and add to the custard mixture.

Using a fine mesh sieve, strain hot custard over the chocolate. Using a hand blender, blend hot custard and chocolate together until smooth and glossy. Add the butter and continue to blend, until totally emulsified. Pour into 3-inch disc mold and freeze. Reserve until needed.

COFFEE GANACHE
In a small saucepan heat the coffee beans and the cream until just simmering, remove from heat, cover the pan with plastic wrap and steep for 30 minutes. Strain and re-scale. Place the coffee mixture in a clean small saucepan, add glucose and bring to boil, pour over chocolate and blend with a hand blender. When smooth and glossy, add the cubed butter and continue to blend until the butter has been emulsified. Pour into 3-inch disc molds and freeze. Reserve until needed.

RICE CRACKER
Boil water, add rice and cook until the rice is over-cooked. Strain out excess water, and blend in a Vitamix, pass through a chinois. Spread out onto a Silpat as thin as possible, allow to dry for at least 24 hours until it is completely dry. Fry in oil, strain on paper towels, season with salt.

ASSEMBLY
Sandwich together the coffee crémeux and coffee ganache, place in the middle of the plate, place a small quenelle of lemon sorbet on top