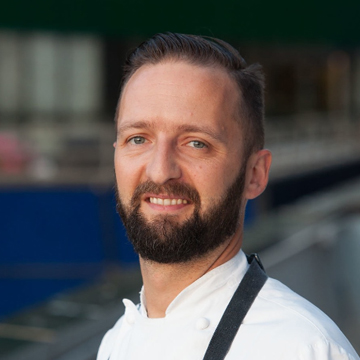 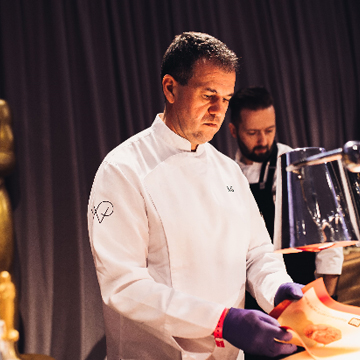 Kamel Guechida started his career in France with a two-year apprenticeship with Mazi Francis, an esteemed 3 Michelin-starred chocolatier in Perigueux. He was later part of the opening team for L’Atelier de Joël Robuchon in Paris in 2003 and Joël Robuchon Monte Carlo in 2004.

In 2013, Guechida was approached by Wolfgang Puck and asked to join the company as Corporate Director of Pastry for the Wolfgang Puck Fine Dining Group, the collection of national and international restaurants of the world-renowned chef.  In this position, Guechida is responsible for creating and overseeing the dessert and bread programs throughout all of Puck’s 21 restaurants plus creating pastry programs for new properties as the group expands its presence into Dubai, the Arab Emirates and Asia.

Valrhona: What inspired you both to enter the world of pastry?
Garry: Both of my parents are chefs and I always wanted to be one.
Kamel: My uncle is a chef at a three-star Michelin Restaurant, he inspired me to become a chef.

Valrhona: Where do your inspirations for new creations come from?
Both: Social media, seasonal items, new chocolates!

Valrhona: Who in your life’s have been the biggest mentor/inspiration in your career?
Garry: Mr. Borzeix-Besse, a French member of the international “Relais Dessert Association”.
Kamel: Freddy Girardet and Joel Robuchon (both named best chefs of the century).

Valrhona: What is your favorite type of pastry to make? To eat?
Garry: Coffee eclairs for sure!!
Kamel: Milk chocolate and passion fruit macarons.

Valrhona: What is your favorite kitchen tip?
Garry: Always anticipate the needs and growth that your company needs to take.
Kamel: Always push forward to inspire your team members.

Valrhona: When pairing with chocolate, what is your favorite flavor combination?
Garry: Pralines in general!
Kamel: Aged Port wine.

Valrhona: What is the corporate initiative you’ve implemented and are the proudest of?
Kamel: Throughout the years with WP, I always implement and develop our Oscars Menu to create a unique experience every year.
Also, I love seeing Chefs that I have invested time and energy and see this person grow into a chef that inspires me.

Which do you prefer Celsius or Fahrenheit?
Both: Celsius

What is your Favorite Restaurant?
Gary: Gjelina in Venice
Kamel: Chalet Swiss in Lausanne.

Which do you prefer Wine or Cheese?
Both in unison: BOTH!

What is your Favorite Kitchen Tool?
Gary: Common Sense!
Kamel: A Whisk

Which do you prefer Cake or Tart?
Gary: Cake
Kamel: Tart

What is your go to snack?
Gary: Reese’s Pieces
Kamel: M&M’s

Which do you prefer Coffee or Tea?
Both: Coffee

What is the Craziest delicious flavor combination you have ever experienced?
Gary: Chocolate Cake and Bacon
Kamel: Citrus Wasabi Panna Cotta and Fuji Apples 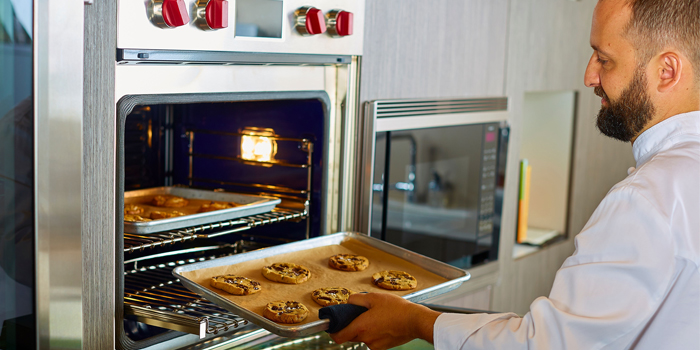 Using a stand mixer with a paddle attachment, cream the butter, sugar, and brown sugar.
Mix on speed 2 for 2 minutes. Then scrape down.
Mix on speed 3 for 9 minutes. The mixture should be light and fluffy with a pale uniform color.
On speed 2, combine eggs 2 at a time and vanilla extract, scraping down after each addition.
Sift together flour, baking soda, and salt.
On speed 1, add the dry ingredients and mix for 1 min, as the dough just begins to come together. Then scrape down.
Add in the chopped ILLANKA 63% Chocolate, and finish mixing just to incorporate the chocolate.
Roll 1500g of dough in parchment paper, to create a long roll, reserve in the refrigerator.
When needed, pull out of the refrigerator, slice and bake at 154°C (310°F) with high fan, for 7 minutes or until golden brown.