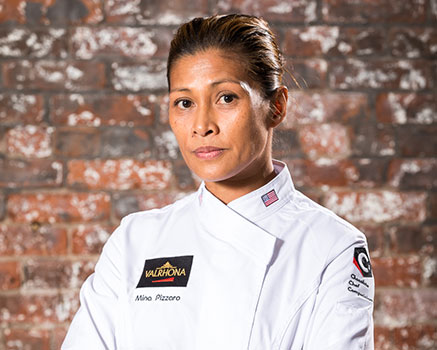 Mina Pizarro grew up in the Philippines surrounded by women who cooked. She went to college to pursue a career in television, but while working in production and advertising, Pizarro took a work-study position at the Institute of Culinary Education in New York and realized her true calling. She continued at ICE to earn her degree in pastry.

A formative internship at Daniel Boulud’s DB Bistro Moderne led to a job offer, and while Pizarro had originally planned to work in bakeries, she instead continued to work in fine-dining restaurants, including Le Cirque, Per Se on the opening brigade, and Veritas, where she learned from a series of influential chefs.

Moving to California for a pivotal change of scenery and approach, Pizarro cooked with Julie Logue-Riordan in Napa Valley, developing a less formal approach to pastry and embracing an ingredient-led style.

Pizarro returned to New York to work first for Cesare Casella at Il Ristorante, then teamed up with Shaun Hergatt to open Juni, where she won a 2015 StarChefs Rising Stars Award. In June 2016, Pizarro joined forces with fellow Rising Star Chef Bryce Shuman to take on the role of pastry chef at another Michelin-star restaurant, Betony. In 2017, Pizarro joined yet another Michelin team at Nic Abello’s L’Appart.

Valrhona:Where do you find your inspiration?
Mina Pizarro:Just about in anything and anywhere really. But in silence and usually in the void of too much thought.

Valrhona: How would you describe your style as a Pastry Chef?
Mina Pizarro: Spontaneous

Valrhona: What are your 2 favorite ingredients to work with?
Mina Pizarro: Salt, Flowers and Herbs. 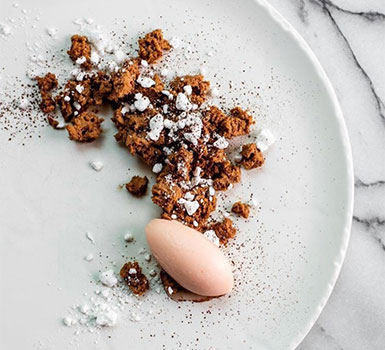 StarChefs: If you could visit any chocolate origin, where would it be and why?
Mina Pizarro: There are so many in consideration, but I would visit Ecuador first. Primarily for having a reputation of producing cacao beans with fine flavor, it is the unique diversity of its geography that adds to its quality, and what interests me most about the region to explore.

StarChefs: Who is your mentor, and what's the most important lesson he/she taught you?
Mina Pizarro: Richard Capizzi. Devotion. It encompasses many lessons that came after lesson 1. With staying true to yourself, strive to always do the right thing and give yourself completely. It is when you can feel happiness.

StarChefs: Who is the the unsung hero of your pastry department? What is his/her title, and why is he/she so valuable?
Mina Pizarro: Ileene Cho- Pastry Asst. She is supportive, adaptable and resilient to my fickle nature.

StarChefs: If you were a flavor, what would you be and why?
Mina Pizarro: Lemon: Pure, Simple, Straightforward, Impactful.