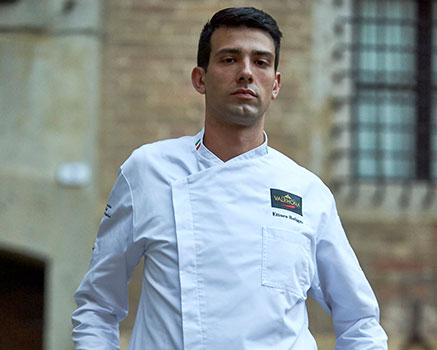 Ettore Beligni is currently improving his skills at the 3 Michelin starred Fat Duck Restaurant . Landing in the UK after winning the Italian C3 Competition selections, Ettore was previously the Pastry Chef of the 2 Michelin starred Arnolfo Restaurant of Gaetano Trovato, where he developed a solid experience in plated desserts finding his own style.

He began his culinary career in traditional restaurants of his home land, Italy. He gradually found that his real passion was in pastry.

Ettore Beligni is very thankful to Valrhona for the amazing opportunity he experienced in the C3 Competition because it helped him grow professionally, both from a technical and a personal point of view, becoming more and more openminded. He suggests all pastry chefs try this kind of experience.

Petit Four: I tried to remember the typical African, black and white ebony objects, using the Combawa that gives further freshness to the praliné.

Plated Dessert: As I love exotic tropical tastes, it was not difficult to be inspired by the origin of the MANJARI 64%. I tried to use ingredients from Madagascar by using acid and sweet contrasts.

StarChefs: If you could visit any chocolate origin, where would it be and why?
Ettore Beligni: I would like to visit Madagascar, because the cocoa, the sea and the variety of nature fascinates me.

StarChefs: What's the first truly delicious pastry you remember eating? Where were you?
Ettore Beligni: I remember when I was a child I had an apple strudel with vanilla cream in Trentino Alto Adige (Italy). It's still one of my favorite desserts.

StarChefs: Who is the the unsung hero of your pastry department? What is his/her title, and why is he/she so valuable?
Ettore Beligni: My hero is Gianluca Fusto, I do not think he needs many explanations. But I appreciate him for his personality, professionalism and creative vein.

StarChefs: If you were a flavor, what would you be and why?
Ettore Beligni: I would like to be Basil. It lives in the summer, the best time of the year, and every preparation that contains it is salty and sweet and becomes magnificent for me.